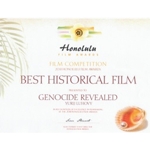 Genocide Revealed, a feature documentary produced and directed by YURIJ LUHOVY has won a series of awards in 2011 including Best Historical Film and Best Documentary.

The film is available in two languages, Ukrainian and English, and is narrated by Oscar-nominated actor Graham Greene and voice-overs are by actress Jill Hennessy and actor Lubomir Mykytiuk.

The list of awards for Genocide Revealed includes the following:

Award of Merit
The Accolade Competition

Further details can be found at: www.yluhovy.com