Saturday November 17, 2007 was a truly historic moment in time for the Perth Ukrainian community with the opening of the Ukrainians Then & Now exhibition in the Perth Town Hall.

In his opening address Mykola Mowczan stated that this year marked the 75th anniversary of the 1932-1933 Holodomor in Ukraine. He urged Australian politicians to support any resolution by the Australian Government to recognize the 1932 – 1933 Holodomor as an act of Genocide against the Ukrainian nation and to support a Resolution to the General Assembly of the United Nations that will be submitted by the Government of Ukraine.

Mykola Mowczan then spoke about WW2 and he reminded all that Ukrainian losses probably numbered 10 million or half of the entire USSR total and twenty per cent of the entire World War II total of fifty million dead. He drew comparison to the population of Australia because Ukraine in the short period of time from 1932 to 1945 Ukraine lost about 20 million people – almost the population of Australia today. He asked “what could have been today’s population of Ukraine if the children had survived both the Holdomor and the WW2?”

Mykola Mowczan then mentioned that next year was the 60th anniversary of the first arrivals of Ukrainian post WW2 migration. He spoke of many of the original migrants arriving with only a suitcase, no English language and little money recommence their new lives in the barracks and tents of Northam or Cunderdin or Graylands Hostel. He acknowledged that others continued their journey to the Eastern States but that the exhibition follows the lives of those of the immigrants that settled in Western Australia.

Mykola Mowcan was proud to say that the generations that followed the 1948 pioneers have become exemplary Australian citizens, following diverse career paths, building careers and businesses that have contributed to West Australia’s powerful economy that we enjoy today.

Mykola Mowczan thanked historian, PhD scholar and personal friend, Mrs Lesa Morgan, for the work she has done to prepare and organize the exhibition. He stated that the Ukrainian Association supports two initiatives by Mrs Lesa Morgan, to produce a book dedicated to the first 60 years of Ukrainian settlement in WA and to construct a monument either in the City of Perth or the City of Fremantle, dedicated to our amazing pioneers.

Mykola also acknowledged Lesa Morgan’s husband the Swedish consul in WA, Mr Bruce Morgan for supporting Lesa during her Ph.D studies and with all things Ukrainian, including her initiative to acquire the prints of the Holodomor period from the library of philanthropist Morgan Williams in Kyiv and making available many other items from her own collection.

Mykola Mowczan also acknowledged a long time Ukrainian friend, photo-journalist Bohdan Warchomij for providing many of the photgraphs for the exhibition from his personal exhibition, the President of the Ukrainian Womens Association Mrs Zirka Doschak and Mrs Susana Prushynsky, Choirmaster of Vesna Womens Choir for leading the assembly in the Ukrainian and Australian Anthems and Luba Valega for providing many Ukrainian items and traditional costumes on display.

In concluding his opening address Mykola Mowczan said, “Whilst many of the original Ukrainian pioneers (our parents and grandparents) are no longer with us today, we their children continue to build on their dreams as the proud Australian-Ukrainians that we are”. 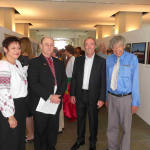 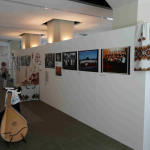 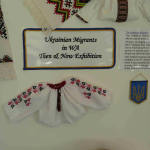 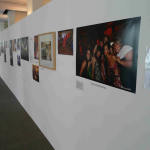 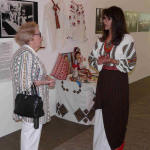 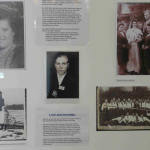 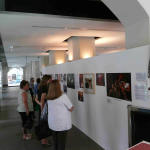 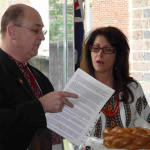 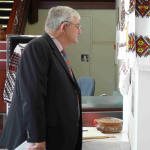