I remember like yesterday being in Kyiv on the evening of November 21, 2013, for the Holodomor Commemoration. It was around 10 p.m. and I was walking with the Australian delegation through Maidan.

On this cold night, Kyiv officials arrived on the Maidan to erect the public Christmas tree, which eventually became known as the Yolka. The tree was decorated with the flags of the world to symbolize that all parts of Ukraine and the international community would not allow former President Viktor Yanukovych to abuse the nation any further.

A small group of demonstrators was erecting a stand and a public address system was being installed in response to the news that Mr. Yanukovych had reneged on Ukraine going to Europe. This started the “Ukraina tse Evropa” (Ukraine is Europe) chants!
By morning, the crowds began to form. The feelings of distrust, being lied to and anger about staying with Russia were festering strongly.

The days went on. A tent city was forming. The crowd grew angrier. The huge demonstrations began. The Maidan was filling up with people. Stages were being built, and there were speeches and rallies. 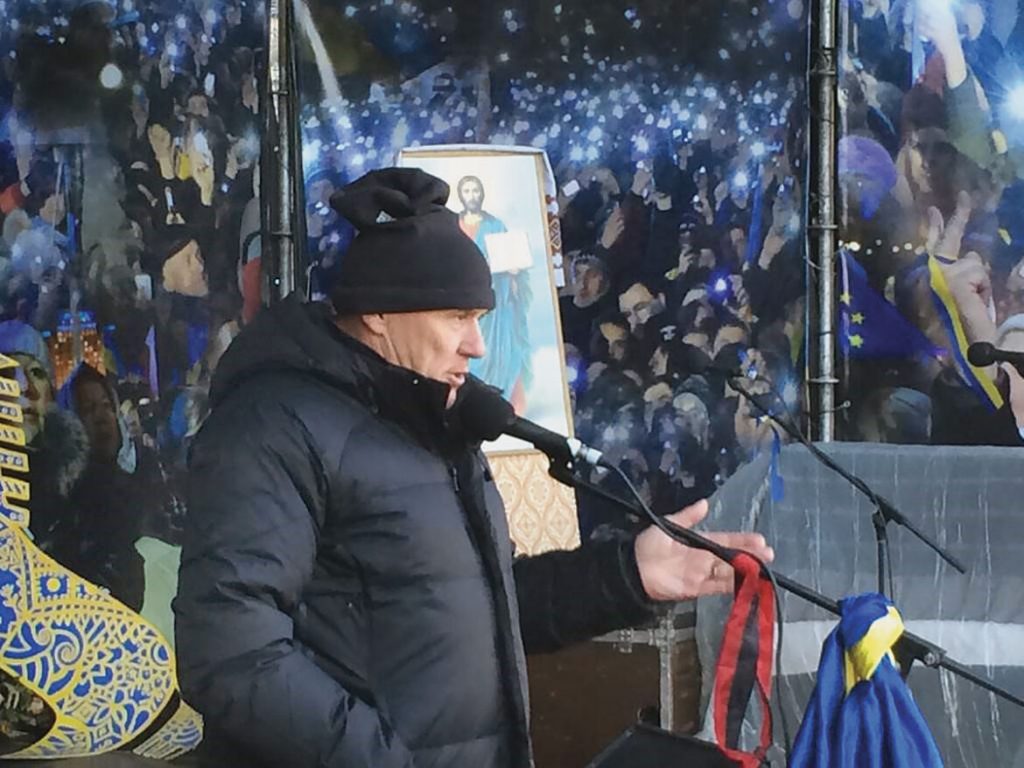 Then at 3:20 a.m. on November 29, 2013, those moving the stage from European Square were beaten by government officials to send a message. Boy did that backfire. The students and protesters sought refuge inside St. Michael’s Cathedral.

That morning we gathered to check on the students, but it also marked the start of a new phase. We had but a few people. We made speeches. We chanted “Kyiv Vstavay” (Kyiv awaken). By lunchtime Kyiv was gridlocked.

The Ukrainian nation no longer focused on just being European, but on the fact that Mr. Yanukovych and his regime had violated basic rights.

On December 1, 2013, the hundreds of thousands of demonstrators in Kyiv, and in other parts of Ukraine, made their feelings and anger felt. The revolution had started.

I recall the tractor episode that afternoon on Bankivska Street, the tear gas, the toing and froing of being chased by the Berkut, and the horrible vision of the beatings on the street near the Writers’ building. This was going to be no ordinary show of strength. The days went by and the weather was getting colder, but the temperature on Maidan was rising.

I remember being asked to take part in the negotiation with members of the presidential administration. We met with then Head of the Administration Andriy Kluyev and we demanded: “You need to stop – this is not going to end well. Had you not beaten the students on November 29, 2013, this may well have finished.” His lame response: “It wasn’t me!”

The situation had hit the point of no return – “Banda Het! Banda Het” (gang, go away) was the chant.

Over the Christmas period the protesters lit open fires to stay warm. I remember the burning tires, the smell of smoke, cooking in pots, people being strong, carolling and the stages having programs constantly.

The coordination of the tent city was amazing.

I had the opportunity to join regular meetings with the leadership of the Maidan in the Trade Unions building, providing a diaspora perspective, reassuring them that the diaspora was with them, participating in news conferences, having international community leaders send messages and seeing international flags fly in the crowd. Yes, we were one in fighting for values, principles, national rights, human rights and the right to create a better tomorrow.

Then people in Dnipropetrovsk, Luhansk, Donetsk, Ternopil, Frankivsk, Lviv, Poltava, Sumy, and the list goes on, held their own demonstrations in their cities. They were also well represented on the Maidan.

Community leaders and politicians from other countries also offered support.
I remember also on November 29 seeing several DC-plated cars arrive at St. Michael’s Square outside the cathedral. Those who know the site will recall that chains separate St. Michael’s Square from the street. The diplomats came to “support” the movement, but they said they would remain on the street side of the chains. “If we step over to the other side, we will be deemed protesters,” the diplomats said.

I recall the street rallies – many hundreds of thousands of people started at Taras Shevchenko National University and marched to Maidan. I remember Patriarch Lubomyr Husar in an open vehicle speaking to the crowd.

And the diaspora did its part. Having an organised diaspora behind it, the Ukrainian World Congress called on its members to visit politicians and government representatives in many countries to advocate that they show their support for Ukraine. This resulted in governments in foreign countries condemning the Yanukovych regime and its behaviour.

“We stand with the people of Ukraine,” was the central message.

Over the course of the revolution, politicians took to the stage, but slowly realized this was a civil revolution – a people’s movement. Civil society took charge.
Then came the titushky, the brutes who looked to intimidate people.

They set themselves up at Mariinsky Park and formed a pro-Yanukovych camp funded by the Party of Regions and their supporters.

I would go for a morning run through the Kyiv side streets and head towards the camp. Dressed in all black, playing the role of a tourist from Australia – wanting intel – I’d engage them. “Hi, I am from Australia. What’s happening?” I’d ask. And then the propaganda would start.

I would go there most mornings and have breakfast with a group that I got to know. I was keen to get into their psyche. “Why are you are supporting a corrupt pro-Russian regime?” I’d ask. The answers were varied. “This is a Western plot to overthrow Mr. Yanukovych and control Ukraine. The organizers are nationalists. They are fascists who have no respect for law and order. We want to stay with Russia.” Those were some of the responses.

Others said: “Don’t know. They are paying us to stand with flags. Haven’t seen Kyiv for a while, great opportunity!”

Then came the days of escalation in February, and the shootings!

I remember the wounded being moved to City Hall and other makeshift hospitals, and I remember the beaten-up people, and then the corpses.

The Heavenly Hundred were killed. Their bodies were on the ground. Then they were moved. Remembrance services were held the next day. The Ukrainian nation mourned, but it was also the start of the rebuilding of the nation. It was a nation that would not allow a regime to act in this way – to have snipers shoot from the bridge on Institutska Street and the surrounding areas.

It was a blatant act of murder by a regime trying to hang on for its own survival. It failed miserably.

The Heavenly Hundred became the symbol of the Revolution of Dignity – they gave the nation the willpower, the consciousness that Ukrainians had to take their future into their own hands.

Seeing the walls of burning tires, again the smell of rubber, the snow, the sandbags and observing the will of the people who had made their position clear – “We will not be beaten.”

You could see the spirit on the faces of the youth, the men and women who stood and demanded change, those cooking, those bringing around cups of tea, coffee and sandwiches. Their resolve seemed to say that, “We will not be moved; we are united.” I had a sense of pride and honour to be part of that change.

The Heavenly Hundred became and now continue to be a symbol of national strength and unity, a symbol that brought together a Ukrainian nation of 60 million people – Ukraine and the diaspora became one.

In many countries there were protests that took the message to the world – Ukraine was under siege, but the power of the people overcame the threat.

There are many commemorative dates in the Ukrainian calendar. The newest is February 20.

February 20 is National Heroes Day – Heroes do not die! We feel the spirit of the Heavenly Hundred.

It has been seven years since the Revolution of Dignity. In that time there have been meetings with the Ukrainian government, with the parents of the Heavenly Hundred and associated organizations to demand that justice be done and those responsible be brought to account.

Mothers and fathers, brothers and sisters, children of the Heavenly Hundred deserve this – they have been left without their loved ones.

Today on Institutska Street, on the walls that surround the grounds of St. Michael’s, there are memorials that commemorate each of our heroes. The Ukrainian World Congress in its signed memorandum with the government of Ukraine has listed building the Heavenly Hundred Museum as a joint responsibility.

One may ask why?

This period of the history, of people power – the Revolution of Dignity – was driven by civil society standing up to a government that showed no respect for life or decency.

The principles and values of the Yanukovych regime were in complete contrast to what the Ukrainian people wanted.

In Ukrainian history there are other periods where people gave their all. The Heavenly Hundred are a continuation of laying down one’s life for others – as God’s teaching says, there is no greater act than giving up your life for another.

For generations to come, the Heavenly Hundred will be remembered as a symbol of what it means to fight for truth, justice and national identity.

The Youth Battle in Kruty in 1918 saw 300 students die standing up for a free Ukraine.
The Heavenly Hundred also stood up for their beliefs and they paid the ultimate price.
Our history has shown that as a nation Ukrainians are resilient and ready to stand and fight for their freedom and for their rights. Thousands of people stood, froze, were beaten, and some gave their lives.

With all this came a demand for reforms. They have been slow in coming and the excuses for not implementing the reforms have often been lame.

To date, there have been no criminal charges against those who murdered innocent civilians on Kyiv’s streets. Judicial reform, constitutional reform, economic reform and anti-corruption reform must be addressed.

To put it in the context of the Heavenly Hundred, they demand that the reforms be dealt with immediately – not for them, as they are looking from heaven, but for their families and Ukraine’s civil society.

The Heavenly Hundred must remain a driving force in building a strong, pro-European, fair, just and influential country on the international stage.

Those who participated with passion at the Revolution of Dignity, those in the diaspora who supported this period of history – together with many millions who were there in spirit – should use February 20 to reflect, recalibrate and rekindle the spirit to achieve the ultimate goals that the revolution set for itself.

May they rest in peace and be remembered forever.