The Australian Government has now been officially approached to support the opening an Australian Embassy in Kyiv Ukraine, consider sending an official Government group of election observers to monitor parliamentary elections in Ukraine in October 2012, support the release from jail of former Prime Minister Yulia Tymoshenko and support the call for recognizing the 1932-33 Great Famine – Holodomor in Ukraine as an act of Genocide and crime against humanity

The Foreign Minister was very versed on issues relating to the current situation in Ukraine and also recognized the community’s efforts over many years and agreed to continue dialogue on the issues raised.

The Minister agreed to provide a written position on the Tymoshenko issue that could be relayed to Ukraine’s authorities.

He also agreed to examine the issue of Australia’s representation as election monitors and observers at the Parliamentary elections in Ukraine.

The Minister also reaffirmed  his commitment of ensuring crimes such as the Holodomor were never repeated. He referred to his long standing support for this issue mentioning his support for a motion on the Holodomor whilst in the NSW Parliament on the 70 Anniversary of the Holodomor in 2003, (attached)

“The meeting was most productive and we will await further discussion and decisions on matters raised” Mr Romaniw said.

Senator Bilyk also offered her support for issues raised and indicated she would work with the Minister in dealing with the matters at hand. She also expressed a strong interest  in heading a delegation to the elections if such a delegation were to be agreed to by the Government.

Mr Romaniw extended an invitation to  the Foreign  Minister to deliver a keynote address at the Conference Dinner on the occasion of 26th Triennial Conference of the  Australian  Federation  of Ukrainian Organisations to be held in July 2012. 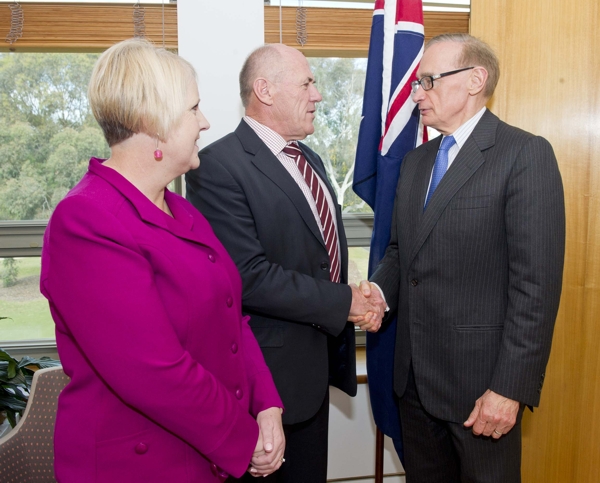 Mr BOB CARR (Maroubra—Premier, Minister for the Arts, and Minister for Citizenship) [11.41 a.m.]: I support the motion and I thank the honourable member for Gosford for moving it. Some of my reasons for talking about these matters now are contained in the terms of the motion itself. However, I will give a further reason. I quote from a review of Alexander Solzhenitsyn’s The Gulag Archipelago by the English writer and critic V. S. Pritchett, in the London New Statesman in 1975:

When people say to [Solzhenitsyn], ‘Why drag all that up from the bad times?’, his answer is that a country’s, a dogma’s evasion of its own past, on this excuse or that, is as fatal to the quality of life as it is to the private heart.

That is a profound truth relevant to our own country’s history. However, in the case of the Ukrainian famine of 1933, the silence and denial surrounding it not only betrayed the victims but also poisoned the springs of western intellectual and political thought and life for a generation. For too long there were too many men and women of undoubted goodwill across the political and ideological spectrum, from right to left, unwilling to acknowledge the evil of totalitarianism and refusing to acknowledge that the evil of totalitarianism was one and indivisible.

In her book on Adolf Eichmann and the Holocaust, Hannah Arendt coined the expression “the banality of evil”. However, in this event, we may see also what I might call the casualness of evil, that is, the casual way that unimaginable evils can be perpetrated and the casual way they can come to be accepted by the rest of the world. At the root of such evils, small or large, always lies the denial of the essential and equal humanity of the victims, be it on racial, religious or ideological grounds. What happened in the Ukraine in 1933? I draw on the account given by Robert Conquest in his book The Great Terror, first published in 1968, at the height of the Cold War, but it is by no means a cold warrior’s tract. Conquest wrote:

Stalin, though retreating [in the face of opposition within the Communist Party] had given up his plans for collectivization …Resistance was now met by a simple method. If the peasant had produced only enough for his near subsistence, leaving none for the State, local enforcement officials reversed that procedure. The last sacks of grain were taken from the barns for export while famine raged. Butter was sent abroad while the Ukrainian infants were dying from lack of milk.

It is also the only major famine whose very existence was ignored or denied by the governmental authorities, and even to a large degree successfully concealed from world opinion.

That was written in 1968 and probably ignores what we now know Mao achieved in China. Conquest noted:

Some foreigners … penetrated the famine area and saw for themselves. But the information was naturally taken up and given widest publicity in the West by those most hostile to the Soviet Union in principle.
By a common reaction, left-wing and even moderate circles were able to persuade themselves that the story was untrue or, a much easier view, greatly exaggerated. [After all] the Soviet Government had not admitted it.

Thirty years later there was brief lifting of the curtain in the Soviet press allowing publication of the serial People Are Not Angels by Ivan Stadnyuk, telling the Soviet people what really happened:

… the men died first, then the children, and finally the women.

A careful examination of all the estimates and the accounts seems to show that over five million deaths from hunger and the diseases of hunger is the best estimate.

Even by the standard of the blood-drenched twentieth century, that is a staggering figure made all the more horrific by a chilling sentence:

… the only case in history of a purely man-made famine.

Throughout European history only one unique and terrible event stands above it, the Holocaust itself. Yet who can doubt that the contemptuous ease with which Stalin got away with his crime emboldened Hitler and his henchmen in their own genocidal criminality? It would not be the only respect in which Hitler learnt from the model provided by Lenin’s and later Stalin’s Soviet Union. In remembering what happened in the Ukraine in 1933, we also remember that 30 million Soviet citizens, including millions of Ukrainians, were to die a few years later in the Second World War. We also do well to remember that all these horrors of the twentieth century took place on the European peninsula, that is, west of the Urals; these are European disasters. Let us remember that fact when we assume the superiority of our own values. However, if it helps to remind us of the consequences of silence and of acquiescence in the face of great evils committed in the name of ideology, race or religion, this motion will have served a good, in fact a great, purpose.

In his account of the Gulag, the labour camps, the prisons and the lunatic asylums where opponents of the regime were incarcerated, Solzhenitsyn always made reference to the Ukrainians. They figured prominently in the suffering of the Gulag. Suspicion of being a Ukrainian nationalist meant persecution and incarceration. We think on this occasion of all those Ukrainians who died in the decades after this criminal man-made famine and who perished in the Gulag. Solzhenitsyn referred to the well-stamped patches of soil behind the barbed wire, the shaven heads, the freezing temperatures, the pinched guts, the starvation, the slow deaths and, in some cases, the sudden deaths. These people were crammed into prisons where they were witnessed by other Soviet dissidents and their perishing recorded. We think of the Ukrainian people and their suffering and the opportunities are now available to them through independence and, we hope, a robust democracy. I commend the motion to the House and thank the honourable member for Gosford for bringing it forward.