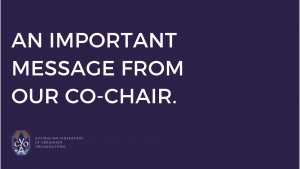 Due to recent events in Ukraine, there is growing concern among the international political community, as well as foreign investors, over the lack of independence in the justice system and over corruptibility of justices.

The laws are there to protect all citizens. The same principles apply in Australia and in any other democratic country.

Recent examples of political reprisals against activists of the Revolution of Dignity and the leadership of the previous Government – whether in the form of false charges, investigations or interrogations – has weakened Ukraine’s position internally and externally.

Abuse of the legal system leads to a lack of confidence in the President and the Government. It leads to civil unrest.

Ukraine does not need this today. Ukrainians have fought too hard and too long to secure democracy and all that goes with it.

The President of Ukraine in his election commitments, committed to reforms, to the rule of law and to no political reprisals.

Guarantees have been made to the international community, to the International Monetary Fund and others that there is true law and order.

The confidence of Ukraine’s international partners, that Ukraine is against Russian aggression and is committed to building a stronger Ukraine, can be eroded very quickly because of political reprisals.

The President of Ukraine is charged with the responsibility of being the Guarantor of the Constitution and in this he must defend the rights and freedoms of Ukrainian citizens.

It is time to stop the rot and focus on the real issues: fighting Russian aggression, calling on stronger sanctions by the international community against Russia, building Ukraine’s positive image and building a strong economy and honest society.

The current situation of playing with the law is a distraction and only plays into Russia’s hands.

If there are to be court cases and charges, they should be laid against those in Ukraine who are conspiring with Russia, who is dragging Ukraine to Putin and diminishing its identity.

They are the culprits that need to feel the full brunt of the law, for anti-Ukrainian propaganda and activity. That will give Ukrainian society and the international community confidence.

The Australian Federation of Ukrainian Organisations stands by the principles of honest and transparent rule of law – and this must be defended.

The price is too dear to say and do nothing.