You are here: Home / Archives for politics australia 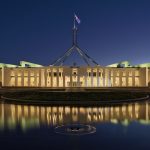 The following motion passed the Senate on December 3 at 11.58am: ******** 877 Senators Bilyk and Dean Smith: To move—That the Senate— (a) notes that during the week of 22 to 29 November 2020 the Ukrainian community in Australia commemorated the 87th anniversary of the Ukrainian famine of 1932-1933, known as Holodomor; (b) further notes that it is estimated that up to 7 … END_OF_DOCUMENT_TOKEN_TO_BE_REPLACED